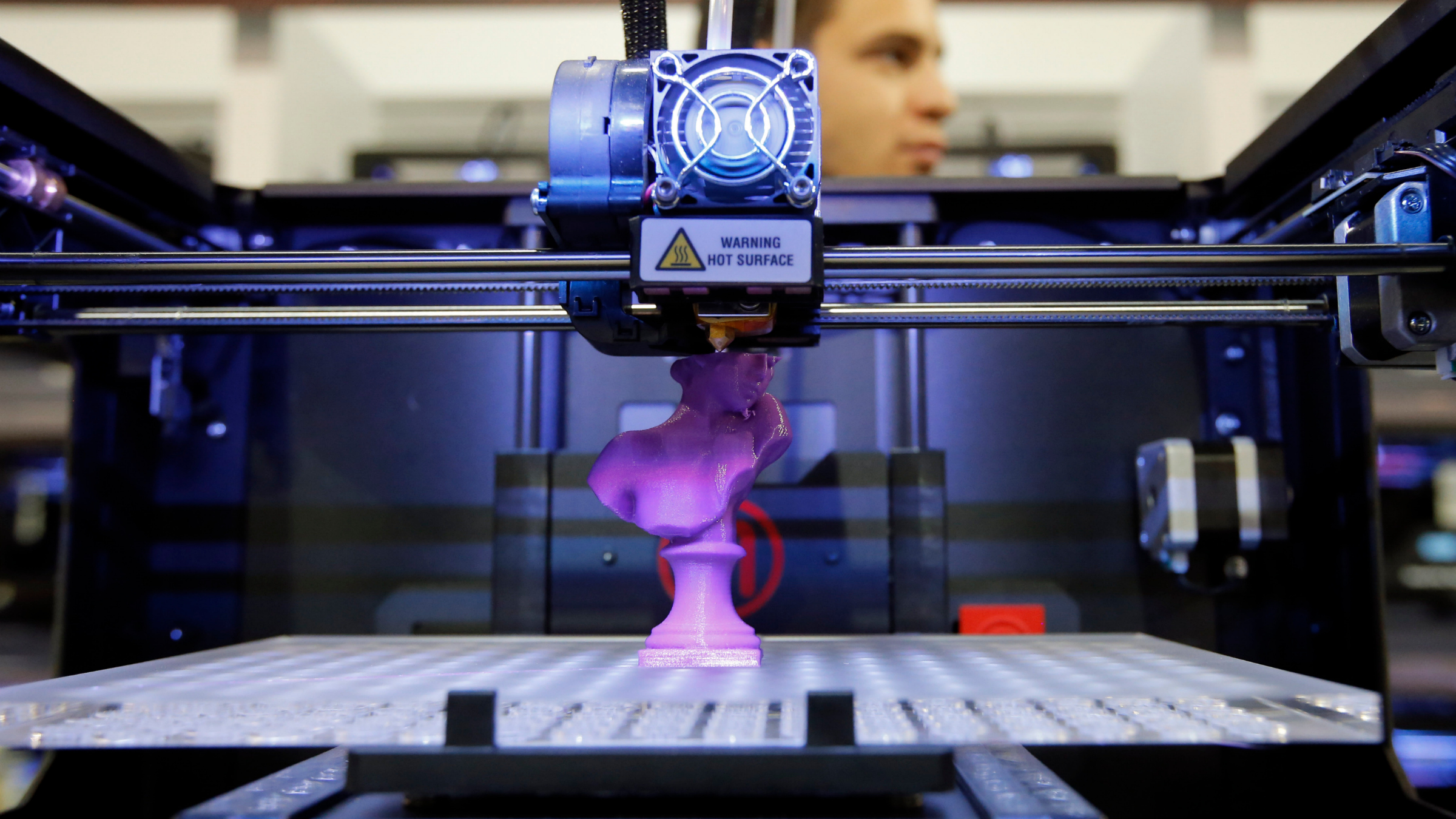 What is 3d printing?

The 3D printing technology made its way to the technological world in the year 1986, but not gain importance until 1990. It was not that popular outside the world of engineering, architecture and manufacturing. 3D printing is also known as desktop fabrication, it can form any material that can be obtained as a powder. For creating an object you need a digital 3D-model. You can scan a set of 3D images, or draw it using computer-assisted design or CAD software. You can also download them from internet. The digital 3D-model is usually saved in STL format and then sent to the printer. The process of printing a three-dimensional object layer-by-layer with equipment, which is quite similar with ink-jet printers. One of the most important applications of 3D printing is in the medical industry. With 3D printing, surgeons can produce mockups of parts of their patient's body which needs to be operated upon. 3D printing make it possible to make a part from scratch in just hours. It allows designers and developers to go from flat screen to exact part. Nowadays almost everything from aerospace components to toys are getting built with the help of 3D printers. 3D printing can provide great savings on assembly costs because it can print already assembled products. With 3D printing, companies can now experiment with new ideas and numerous design iterations with no extensive time or tooling expense. They can decide if product concepts are worth to allocate additional resources. 3D printing could even challenge mass production method in the future. 3D printing is going to impact so many industries, such as automotive, medical, business & industrial equipment, education, architecture, and consumer-product industries.

A once-shuttered warehouse is now a state-of-the art lab where new workers are mastering the 3-D printing that has the potential to revolutionize the way we make almost everything.


Stereolithography (SLA)
This method was patented by Charles Hull, co-founder of 3D Systems, Inc in 1986. The process of printing involves a uniquely designed 3D printing machine called a stereolithograph apparatus (SLA), which converts liquid plastic into solid 3D objects. Most printing techniques require computer aid design (CAD) file to process the object. This file contains information about dimensional representation of an object. CAD file must be converted into a format that a printing machine can understand. There is Standard Tessellation Language (STL) format that is commonly used for stereolithography, as well as for other additive manufacturing processes. The whole process consists of consequent printing of layer by layer hence STL file that printing machine uses should have the information for each layer. SLA printing machines donotwork as usual desktop printers which extrude some amount of ink to the surface. SLA 3D printers work with excess of liquid plastic that after some time hardens and forms into solid object. Parts built with 3D printers type like this usually have smooth surfaces but its quality very depends on the quality of SLA machine used. The process of printing includes several steps. It starts from creation of 3D model in CAD program, special piece of software processes the CAD model and generates STL file that contains information for each layer. There could be up to ten layers per each millimeter. Then SLA machine exposes the liquid plastic and laser starts to form the layer of the item. After plastic hardens a platform of the printer drops down in the tank a fraction of a millimeter and laser forms the next layer until printing is completed. Once all layers are printed the object needs to be rinsed with a solvent and then placed in an ultraviolet oven to finish processing.

Fused deposition modeling (FDM) technology was developed and implemented at first time by Scott Crump, Stratasys Ltd. founder, in 1980s. Other 3D printing companies have adopted similar technologies but under different names. A well-known nowadays company MakerBot coined a nearly identical technology known as Fused Filament Fabrication (FFF). With help of FDM you can print not only functional prototypes, but also concept models and final end-use products. What is good about this technology that all parts printed with FDM can go in high-performance and engineering-grade thermoplastic, which is very beneficial for mechanic engineers and manufactures. FDM is the only 3D printing technology that builds parts with production-grade thermoplastics, so things printed are of excellent mechanical, thermal and chemical qualities. When the thin layer of plastic binds to the layer beneath it, it cools down and hardens. Once the layer is finished, the base is lowered to start building of the next layer. Printing time depends on size and complexity of an object printed. Small objects can be competed relatively quickly while bigger or more complex parts require more time. Comparing to stereolithography this technique is slower in processing. When printing is completed support materials can easily be removed either by placing an object into a water and detergent solution or snapping the support material off by hand. Then objects can also be milled, painted or plated afterwards.


Direct Metal Laser Sintering (DMLS)
DMLS (Direct Metal Laser Sintering) is an additive manufacturing method. It creates parts additively by sintering fine metal powder particles, to fuse them together locally. Like in the SLS process, your metal part will be created layer by layer, according to your 3D model. A major difference is the sintering temperature. Polyamide needs to be sintered at a temperature of 160°C to 200°C, when metal melts at a temperature around between 1510°C and 1600°C meaning that a more high-wattage laser is needed to reach that temperature. First of all a roller will apply a layer of metal powder, then the laser will sinter the powder according to the 3D file and the build platform will get down before applying a new layer of powder... The process will be repeated until the desired part is created. Once it's finished, the metal part needs to cool down before being extracted. If the metal part needed supports, these supports will then be removed manually. The DMLS process is highly beneficial for those who need to produce their metal parts for prototyping or low-volume production by eliminating time-consuming tooling. It also allows to create complicated and highly detailed designs that would be possible with any other technology, due to the limitations of the traditional manufacturing processes.

Selective Laser Sintering (SLS) is a technique that uses laser as power source to form solid 3D objects. This technique was developed by Carl Deckard, a student of Texas University, and his professor Joe Beaman in 1980s. Later on they took part in foundation of Desk Top Manufacturing (DTM) Corp., that was sold to its big competitor 3D Systems in 2001. As was stated previously, 3D systems Inc. developed stereolithography, which in some way is very similar to Selective Laser Sintering. The main difference between SLS and SLA is that it uses powdered material in the vat instead of liquid resin as stereolithography does. Unlike some other additive manufacturing processes, such as stereolithography (SLA) and fused deposition modeling (FDM), SLS doesn’t need to use any support structures as the object being printed is constantly surrounded by unsintered powder. Like all other methods listed above the process starts with creation of computer-aided design (CAD) file, which then needs to be converted to .stl format by special software. The material to print with might be anything from nylon, ceramics and glass to some metals like aluminum, steel or silver. Due to wide variety of materials that can be used with this type of 3d printer the technology is very popular for 3D printing customized products.

PolyJet is a powerful 3D printing technology that produces smooth, accurate parts, prototypes and tooling. With microscopic layer resolution and accuracy down to 0.1 mm, it can produce thin walls and complex geometries using the widest range of materials available with any technology. Benefits of PolyJet: 1-Create smooth, detailed prototypes that convey final-product aesthetics. 2-Produce accurate molds, jigs, fixtures and other manufacturing tools. 3-Achieve complex shapes, intricate details and delicate features. 4-Incorporate the widest variety of colors and materials into a single model for unbeatable efficiency. PolyJet is the perfect solution for designers who want realistic models but have to contend with inconsistent color results and rough finishes. PolyJet is the fastest technology in the Stratasys Direct arsenal, with parts ready to be shipped in hours. 3D printing with PolyJet allows you to incorporate multiple materials into a single print, resulting in quick production of realistic parts and design iterations early in the product development life cycle. 3D printing with PolyJet means the smoothest precision possible with fine resolutions that bring delicate features to life.

The end of the 1980s and beginning of the 1990s was the earliest time additive manufacturing was used in rapid prototyping. Prototypes offer to examine an object closely and to test it prior to production of the thing. Rapid prototyping, known as RP, suggest much quicker prototype production, often it would take several hours or days, depending on the design. In RP models are created with the help of computer-aided design, known as CAD, soft, machines following that model should define the way of creating the object. So the procedure of constructing things printing its layers is known as 3D printing. The initiation of 3D printing took place in Massachusetts Institute of Technology and company named 3D systems. At the beginning of the 1990s MIT originated the practice they further labeled with the name 3D printing, certified as 3DP and that’s how 3d printing history began. In February 2011 MIT has awarded licenses to 6 corporations and suggested 3DP for its products. 3D systems have introduced a number of 3D techniques since it was settled in 1986. Some of the technologies, like stereolithography apparatus (SLA) and selective laser sintering (SLS), have been trademarked. As 3D Systems and MIT are still the front runners in the 3D printing area, other corporations like Objet Geometries and Stratasys have introduced new technologies to the market. Nowadays some 3D printing technologies are used to originate fulfilled, ready products. The technology is being improved through highest quality of details printed and the time required to print a detail and clean it when already printed. The time required is becoming less, the substances and appliances growing cheaper. The wider range of materials is coming into use, like ceramics or metals. The size of printers are steadily changing, becoming smaller and smaller. Additive manufacturing, including 3D printing, are still new to the area of mass-production. AM can be compared to computer numerical controlled machining. The latter, however, is quite contrary to AM. In CNC the material is detached up to the ready product. Its more like a stone fretwork statue.